Surf Spots
Lombok is one of the most beautiful islands in Indonesia. Similar size to Bali but a different shape with a long south facing coastline exposed to the Indian ocean. It is the southern coastline that makes up the majority of the surf spots scattered among Lombok’s many bays.

Most of the surf breaks in Lombok suit beginner to intermediate surfers except the most famous of them all “Desert Point” out on the south-west tip. Desert point has been labelled the best wave in the world by some and suits the most experienced surfers only. It has been responsible for a lot of life-threatening injuries all too frequently!

Although Lombok neighbours the westernised hustle and bustle of Bali it is very different. Often overshadowed by Bali it actually works in its favour. Unspoiled beaches and much less commercialisation the island still possesses the raw beauty that has been lost in Bali, although Lombok is generally regarded as of lower quality and intensity than Bali’s surf spots.

Kuta Lombok is the most central base for surfers, however, to reach the range of surf spots some travel is involved whether it be a small drive by road or a required boat journey to access some surf breaks. You will be able to find out everything you need to know in the breakdown of each wave below. 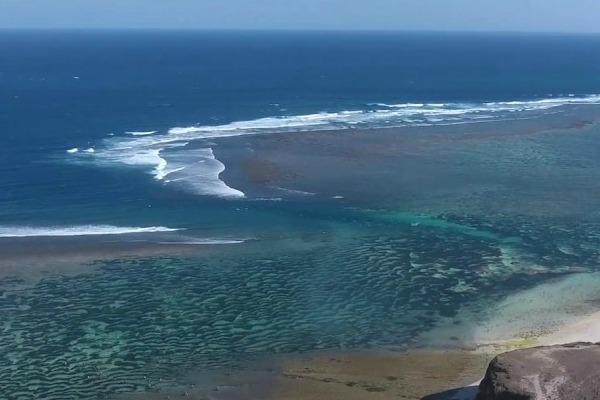 Lombok’s reefs and beach breaks lap up the swell in season between April and October when swells are constantly being pushed up from the south-west across the Indian Ocean however the trade winds blowing from the south-east are not so favourable for some of the breaks. During the off-season when the trade winds switch many of the surf spots become as clean as glass and when the irregular offseason swell does hit there are some great waves to be found.
While the mountainous north rises to 3726m (12,224ft) at the top of Mount Rinjani, the south is a range of inland hills that spread behind the sweeping bays of the southern beaches. In terms of location, most surf breaks are truly breathtaking! Selong Belanak is the ultimate learner’s wave in Lombok. Ideal for beginner surfers to practice taking off and getting to their feet in a safe environment with little to no hazards. The local surf instructors provide a fun and playful environment that makes so many travellers first experience learning to surf a thrilling and enjoyable experience. Become a member and get full access to find out much more.

The channel is to the right of the wave so catching the right brings you straight back to the channel and to a quick paddle back out, which is great for beginners. Gerupuk is an inlet consisting of a few small bays and home to five super fun surf breaks. One of the most consistent and user-friendly waves here is known as the Inside Right which works on most wind directions. This reef break is suitable for all levels and provides a long wall and a forgiving lip a short boat ride from Gerupuk village. Inside Ekas is a great wave for beginner or intermediate surfers that can be surfed on all tides. As the tide drops, the wave turns into a wide peak breaking right and left. Rights are typically a bit more walled and fast-breaking while the left’s tend to peal over a long stretch of reef. Rights and lefts both offer an easy drop into long thigh burners great for plenty of maneuvers. This lumpy right-hander has multiple peaks with rippable sections for intermediate surfers upwards. If you want to surf Gerupuk’s range of super fun waves every day, stay in one of the many accommodation options that Gerupuk has available. This way, you can see what the waves are doing within the bay, jump straight into a boat and hit the surf when it looks good, avoiding the 25-minute drive from Kuta. Become a member and get full access to find out much more. One of the more exposed reef breaks in Lombok picking up swell easily the wave changes depending on the size of the swell. Head high and below the surf at Mawi peaks up into an A-frame breaking right and left. At this size, the right provides a fast but perfect barrel that you can tuck into and pull out of before the sharp reef gets shallow on the inside. Become a member and get full access to find out much more. Outside Ekas is a steep hollow wave that breaks at the base of a cliff face. Unlike its counterpart Ekas Inside, SE swell is best as it bends in and hits the reef properly sending some heavy and hollow waves down the reef. But don’t be fooled, SW and WSW swell still send plenty of fun waves, just not quite as hollow. Desert Point is approximately 2.5 hours drive from Kuta Lombok, so if you want to score one of the worlds more perfect waves, you can organise a driver and make it a day mission. If you’re a surf adventurer through and through, then there are several basic accommodation options (mostly huts) located at Desert Point which you can book on arrival. Where should I stay in Lombok for surfing?

Lombok’s central hub for surfers is Kuta. Same name as Kuta in Bali but different island and completely different atmosphere – think chilled and laid back in comparison. Staying in Kuta gives you the option to travel east or west by scooter, or car to reach nearby surf spots. Here, you can surf a large variety of waves, (if you’re willing to travel each day) and also enjoy the comforts of cafes, restaurants and shops. However…if you want to dial in one wave in particular then it’s a good idea to book accommodation as close by as possible to increase your time in the water.

Is Lombok worth visiting for surf?

When is the best time to visit Lombok for surf?

Lombok’s reefs and beach breaks lap up the swell in season between April and October when swells are constantly being pushed up from the south-west across the Indian Ocean however the trade winds blowing from the south-east are not so favourable for some of the breaks. During the off-season when the trade winds switch many of the surf spots become as clean as glass and when the irregular offseason swell does hit there are some great waves to be found.

What are the typical costs per night for accommodation in Kuta Lombok?

There has been a lot of growth in the number of villas built in the area. Ranging from simple bungalows or cottages starting at around $25USD/night to upwards of one thousand dollars per night for brand new luxury villas with amazing views. Most can be found on Airbnb.

On average, expect to pay approximately:

How do I book long term accommodation in Lombok?

It’s best (and easier) to find a place long term once you’re in Lombok. It’s crucial to gain experience of the areas first, so you know exactly what’s around and what to expect within the neighbourhood. At the very least stay a month in various homestays, meet people, get your bearings, and then decide on the area you like most. Yuli’s Homestay is beautiful and reasonable, plus you’ll have a kitchen available to you also.